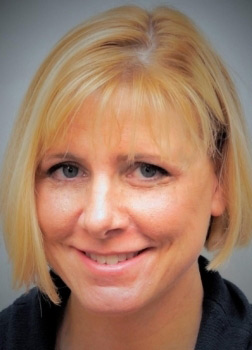 Amy Salisbury is an associate professor of Pediatrics and Psychiatry and Human Behavior at the Alpert Medical School at Brown University. She is a clinical research scientist and advanced practice nurse clinician at Women & Infants’ Hospital and the Brown Center for the Study of Children. Her research is dedicated toward improving mental health outcomes for infants and children at risk for psychopathology by examining sleep and neurobehavioral development from the fetal period through childhood. Clinically, she works with families and their infants to help establish healthy sleep and circadian rhythms from the earliest days post-birth due to the critical role of infant sleep and regulation to long-term child outcomes. She directs the recently established Family Care Follow-up Clinic for substance exposed newborns and their families at Women & Infants’. Dr. Salisbury’s program of research focuses on fetal and infant outcomes related to prenatal conditions and exposures, primarily maternal depression, SSRI exposure, and maternal smoking. She is now expanding her program to extend her expertise toward examining alterations in sleep development in opioid exposed newborns

Pregnant women and their newborns have been equally affected by the opioid use epidemic, with a 4-fold increase in the numbers of pregnant women with opioid use disorders delivering infants across the U.S. (1). Opioid use disorders in pregnancy have been related to significant risk for maternal death, preterm birth, fetal demise, and Neonatal Abstinence (Opioid Withdrawal) Syndrome (NAS). Most exposed infants experience at least some physiological, autonomic and/or behavioral signs of NAS, with 60-80% judged to be severe enough to require treatment to prevent serious sequelae. The diagnosis of NAS is most commonly based on subjective ratings across an array of indicators. The scoring tools rely heavily on subjectivity of the rater and proper training that is not always obtained. This results in critical decisions being made regarding treatment initiation and weaning with a lack of objective information on which to base the diagnosis and treatment guidelines. Short sleep cycles and inadequate amounts of specific sleep states results in poor sleep state organization. Sleep state organization a central index of brain maturation in early development (2-4) and predicts neurodevelopmental outcome (5-10). Measurement of sleep state organization is therefore a biomarker of brain function as well as a predictor of longterm outcomes. Current medication and behavioral treatments for NAS are likely to change newborn sleep state organization and breathing patterns, yet, newborn sleep state organization before, during or after treatment for NAS is rarely measured. Further, there is a lack of information about the short- and long-term impact of disrupted sleep state organization in opioid exposed newborns. Therefore, there are at least 3 compelling reasons to objectively measure the physiological and behavioral components of sleep iin POE infants: 1). To improve accuracy of NAS sign scoring that will lead to a more accurate diagnosis as well as indicators for treatment initiation, 2) to understand the relative effects of treatments for maternal opioid use disorders in pregnancy on infant brain development to better inform treatment decision in pregnancy, and 3). to understand relative effects of NAS treatment on brain development. Our research program has been measuring the key indicators of NAS that are open to subjectivity, including length of sleep, respiration, and motor activity, objectively in non-NAS samples for the past 10 years. We developed a sleep recording protocol that is unobtrusive, allows for natural care-taking of the infant, and is not a source of irritation to the infant. To address the current critical needs outlined above, we plan to use our established, unobtrusive sleep recording methods to measure sleep and respiration in 30 newborns exposed to maternal opioid use in pregnancy before, during, and after NAS signs are experienced. The data will be used to develop a larger research proposal to examine sleep and neurobehavioral development in opioid exposed fetuses prior to birth (before withdrawal) through early childhood to examine sleep state and respiration patterns as potential biomarkers for NAS prediction, severity, and/or treatment response. This protocol will be added to a current, ongoing study that is examining infant cry signatures as predictors of NAS, newborn epigenetics and neurobehavior in opioid exposed newborns at Women & Infants Hospital. We will leverage the infrastructure of the ongoing study and add staff who are needed to set up and monitor the equipment, and to process and score the sleep and respiration data. The sleep recording system consists of an ambulatory, wireless, physiology sensor and receiver system (Grass Aura light, Graesby) that is synchronized with a digital video recording obtained from an infrared video camera focused on the infants’ crib. The sensor is not attached to the infant so that the equipment does not interfere with care of the infants; the system will be set up in a corner of the infants room within 18 hours of delivery and will run daily for at least 12 hours through hospital discharge so that any changes that occur in sleep or respiration measures with escalating NAS signs or subsequent treatment can be measured in relative time. The first aim of this project is to test the feasibility of obtaining these recordings for prolonged periods of time and to determine the best monitoring schedule and protocol for the larger proposal. In the second and third aims, we will examine sleep and respiration patterns within opioid exposed newborns for differences related to NAS onset and severity requiring treatment, and between opioid exposed newborns and non-exposed newborns using an existing database of sleep recordings collected with the same equipment from 243 infants recorded in a prior longitudinal study that recorded sleep on Days 2, 14 and 30 after birth. The opioid exposed newborns will be matched to infants from the existing database to control for potential effects of gestational age at birth, sex, family socioeconomic status, and other maternal substance use. The data from aims 2 and 3 will be used to determine the sample size needed in the larger study, inform models to be tested, and examine if there are new, unexpected questions to be asked based on the findings. The work in this proposal will provide us with the foundation needed to understand how prenatal opioid exposure affects newborn sleep state organization and respiration, and their potential as biomarkers of NAS, NAS treatment response, and as a modifiable target for improvements in developmental outcomes.

Complete List of Published Work in My Bibliography: http://www.ncbi.nlm.nih.gov/sites/myncbi/amy.salisbury.1/bibliography/40529367/public/? sort=date&direction=ascending

Title: RCT of a tailored walking program to reduce stress among pregnant women

Title: Efficacy of a prenatal yoga intervention for antenatal depression