Creating an interdisciplinary research program that examines the overlap of transportation safety and injury prevention. 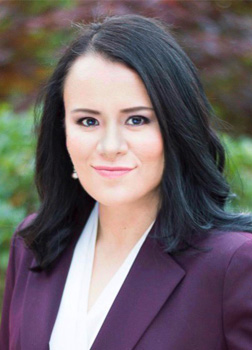 Dr. Dahianna Lopez is a tenure-track professor at the University of Rhode Island College of Nursing who is deeply committed to preventing opioid overdoses and vehicle-related crashes. She is creating an interdisciplinary research program that examines the overlap of transportation safety and injury prevention. She has considerable professional experience working in San Francisco, Boston, Providence, and the State of Rhode Island with traffic engineers, police officers, emergency medical care providers, and lawmakers to prevent pedestrian and bicycle injuries as well as opioid overdoses. Dr. Lopez is a registered nurse who holds a PhD in Health Policy from Harvard University, dual master’s degrees in nursing and public health from UCLA, and a bachelor’s degree in psychology from UC Berkeley.

Driving under the influence of illicit drugs is a significant driver of morbidity and mortality in the United States (U.S.). In 2018, approximately 12.6 million people over the age of 16 drove under the influence of drugs other than alcohol. Between 2006 and 2016, fatally injured drivers testing positive for drugs other than alcohol increased from 29% to 44%. In 2016, one in every five drivers who experienced a fatal motor vehicle crash tested positive for opioids. A meta-analysis found that drivers on prescription opioids are two times as likely to be involved in a motor vehicle crash than other drivers and are nearly 50% more likely to be responsible for motor vehicle crashes than other drivers. Research also suggests that men are significantly more likely than women to drive under the influence of cannabis and more likely to drive within one hour of cannabis use than women. However, no data exist for sex differences in driving under the influence of opioids. Moreover, the current U.S. overdose crisis is primarily driven by the proliferation of synthetic opioids (e.g., fentanyl). Synthetic opioids are highly potent and fast-acting, which increases the likelihood of overdose and loss of consciousness, potentially exacerbating the problem. While newspapers in the U.S. have documented drivers found overdosed on opioids in (parked or crash-involved) motor vehicles, to our knowledge, there are no published empirical studies on overdoses in motor vehicles (ODMV).

Prior research has shown that motor vehicles, as semi-public spaces, are integral to drug use routines among many people who use drugs. However, there is a dearth of research contextualizing the occurrence of ODMV. In Rhode Island, people who experience ODMV are immune from drug possession charges because of the Good Samaritan Law; however, they remain at risk for arrest for driving under the influence of drugs, even if they overdose in a parked vehicle. In this context, it is essential to understand ODMVs to inform public health, law enforcement, and transportation safety interventions that minimize overdoses and arrests while maximizing access to recovery and road safety. Using Rhodes’ Risk Environment Framework, this project aims to investigate the: (1) extent and geographic distribution to which people are overdosing in motor vehicles in Providence, RI; (2) environmental and social conditions shaping ODMV occurrence and (3) burden of injuries associated with ODMV events between January 1, 2017, and June 1, 2021. Providence, RI, is ideal for undertaking this work as the state has one of the highest opioid overdose morbidity and mortality rates in the U.S. This study will be one of the first to characterize ODMV and examine injuries to people beyond those who overdosed in a vehicle. Data from this pilot study will be used to identify specific prevention measures that minimize overdoses and arrests on-scene while maximizing road safety and facilitate access to treatment.