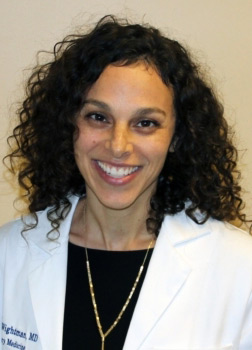 Rachel S. Wightman, MD is an Assistant Professor in the Department of Emergency Medicine at The Warren Alpert Medical School of Brown University. She serves as faculty in the Division of Medical Toxicology and the Addiction Medicine Fellowship and works as an attending emergency medicine physician at Rhode Island Hospital and The Miriam Hospital. She completed medical toxicology fellowship and emergency medicine residency at New York University School of Medicine/ Bellevue Hospital Center. She is board certified in medical toxicology and emergency medicine.

Dr. Wightman’s primary clinical expertise is in the evaluation and management of drug toxicity syndromes in complex medical patients and enhancing medication safety for high-risk drugs. Her scholarly interests focus on evaluation and tracking of emerging drug trends, opioid use and abuse, and caustic exposures.

The overdose epidemic is driven by illicit fentanyl and fentanyl analogues, often combined with synthetic simulants. The addition of new psychoactive substances (NPS), a broad classification of new substances constituting a diverse range of chemicals including stimulants and hallucinogens as well as research chemicals related to benzodiazepine and opioid classes, to the illicit drug market further complicates the drug supply. People who use drugs want to know what is in their drugs and will adjust their use and take more preventative actions in response. Unfortunately, the ability to test, detect and report substance exposure including NPS at overdose accurately within the healthcare system does not exist given current clinical toxicology testing protocols. The Emergency Department (ED) standard for drug exposure evaluation is urine drug screen testing (UDS). UDS has limitations in analytical selectivity and scope which can lead to incorrect provider assumptions regarding drug exposure. Additionally, UDS omits evaluation of NPS and other pharmaceuticals, including active cut, that can increase overdose risk, resulting in an incomplete picture of drug exposure and supply safety. Our goal is to evaluate current toxicology testing protocols in the Emergency Department to positively impact patient, provider, and public health outcomes including clinical care, drug supply surveillance, and harm reduction outreach.

The specific aims for the proposed study are:

The United States is experiencing a public health crisis of opioid overdose deaths. Public funds support state and national initiatives to combat the ongoing opioid epidemic. Unfortunately, there is little data on sex and gender differences for risk of development opioid use disorder and fatal overdose, which may have meaningful implications for opioid misuse prevention, interventions, and therapies.

A retrospective review of accidental or undetermined opioid-involved overdose deaths (aged 17 to 70) occurring in Rhode Island (RI) from 2016-2018 will be performed using data from the RI Department of Health State Unintentional Drug Overdose Reporting System (SUDORS) database.1 Pharmacologic differences in fatal opioid overdose based on the biological variable of sex will be defined via analysis of opioid parent/metabolite and co-exposures results on post-mortem toxicology testing. For fatal opioid overdoses with fentanyl, the fastest rising cause of death nationally, sex-specific differences in fentanyl metabolism as a marker for rapidity of death will be evaluated. Additionally, sex-differences in opioid prescribing history for decedents of opioid overdose will be analyzed.

This study will provide novel insight into the toxicological drivers of how and why individuals are dying from opioid overdose with a unique sex specific lens that can be used to inform future opioid prescribing practices and sex-based approaches to opioid overdose prevention and treatment. The proposed research is innovative because it is an objective, unbiased approach to evaluate sex differences in fatal opioid overdose toxicology that does not rely on self-reported data. Results of this project will be used as pilot data to design a future study analyzing quantitative post-mortem toxicology concentrations of opioid parent and drug metabolites to clarify sex-differences in drug metabolism in fatal opioid overdose.